Tonight's the night! The Earthshot Prize, the centrepiece of the Prince and Princess of Wales' Boston visit unfolded in MGM Music Hall at Fenway with a star-studded ceremony. 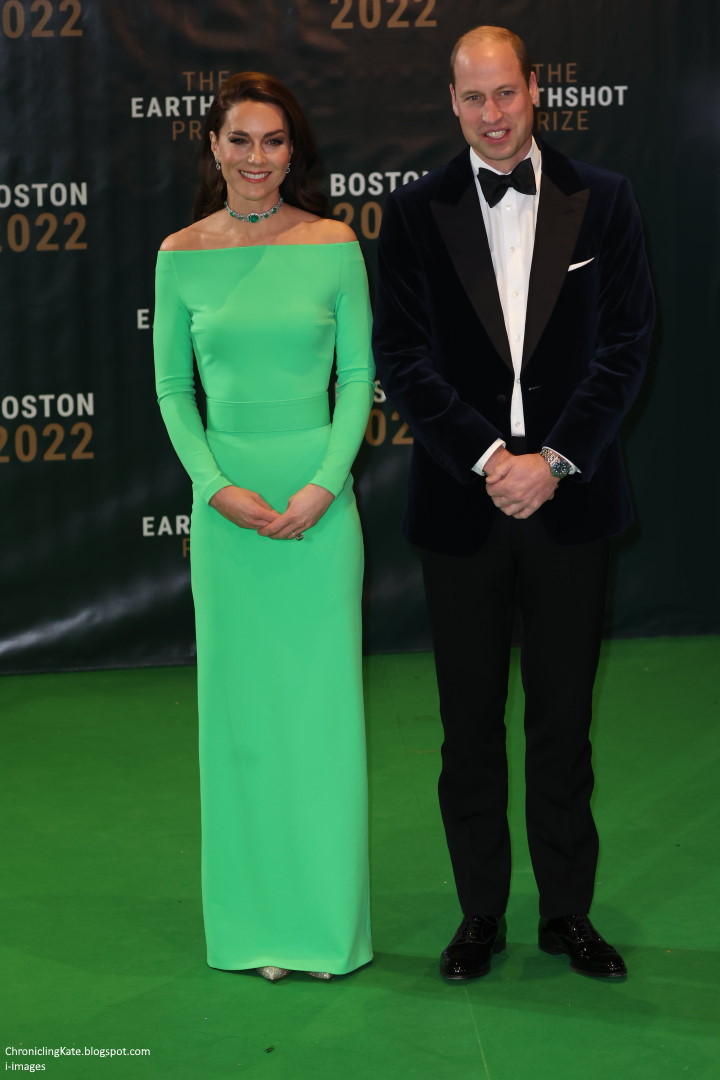 The couple made a stylish arrival after a busy day which saw Kate visit Harvard and William spending time at the President John F. Kennedy Library & Museum with Caroline Kennedy and her children Jack and Tatiana. He rounded off the visit by catching up with President Joe Biden. 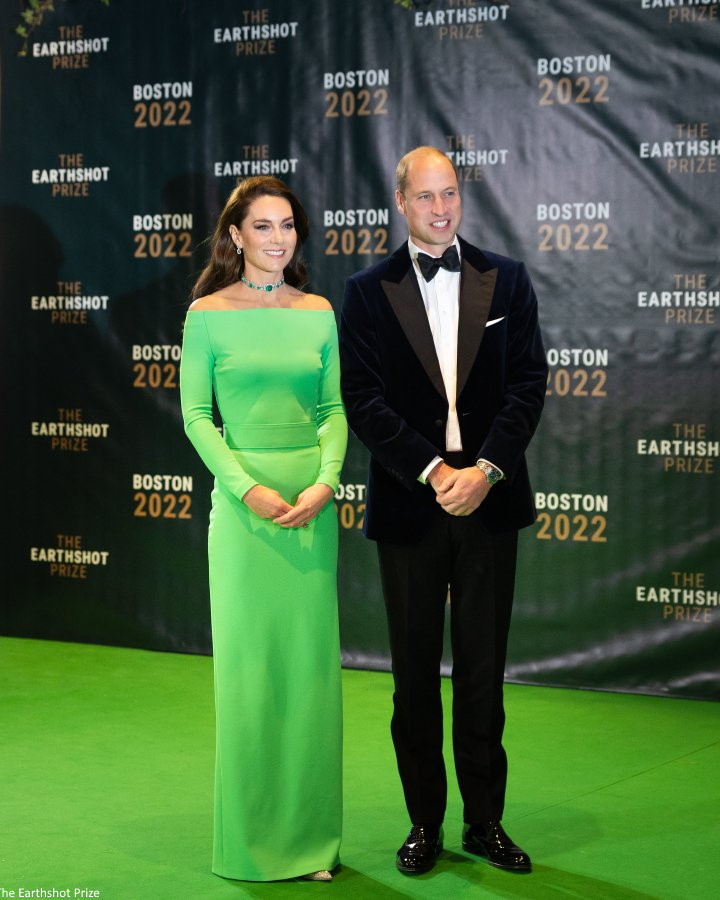 The Prince and Princess of Wales have arrived at #EarthshotBoston2022. In a GREEN dress! #wbz pic.twitter.com/3jcIO1xBu9

For the second annual prize, it was important to William and Earthshot to host the annual event in Boston in homage to the Massachusettsan president whose time in office inspired the effort; President Kennedy’s ‘Moonshot’ programme in the 1960s united millions of people around the goal of reaching the Moon. On Wednesday at City Hall, the Prince said: "Sixty years ago, President John F. Kennedy’s Moonshot speech laid down a challenge to American innovation and ingenuity. 'We choose to go to the moon, not because it is easy but because it is hard.' It was that Moonshot speech that inspired me to launch the Earthshot Prize with the aim of doing the same for climate change as President Kennedy did for the space race. And where better to hold this year’s Awards Ceremony than in President Kennedy’s hometown, in partnership with his daughter and the Foundation that continues his legacy." 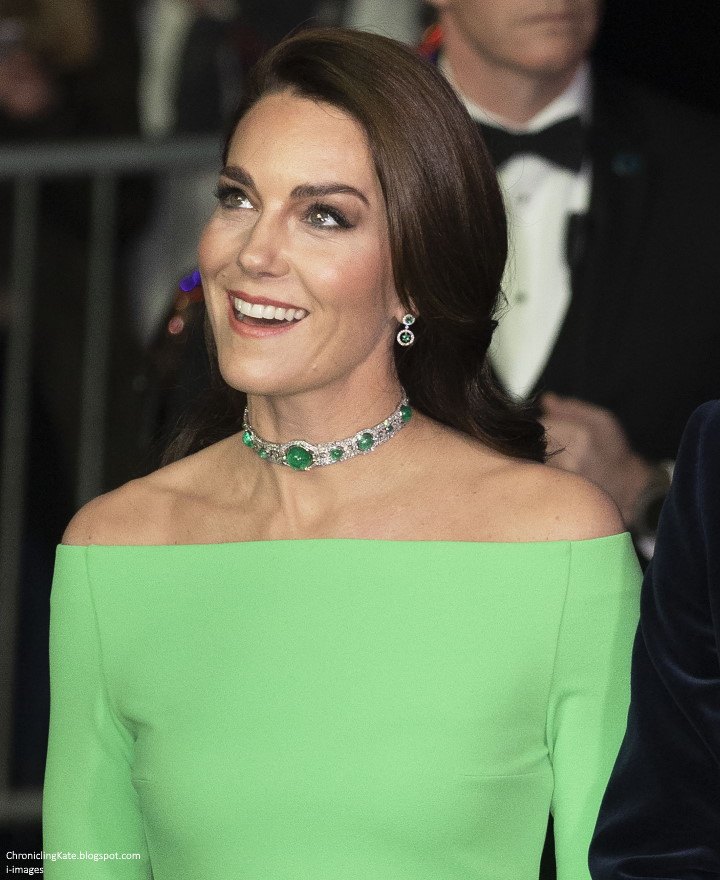 Created by Prince William and the Royal Foundation, the Earthshot Prize has led a global search for the most effective and innovative solutions to the greatest environmental challenges facing the planet. A Kensington Palace source has described the prize as William's "Superbowl moment", adding: "He looks forward to continuing to use the platform each year to shine a light on some of the most impactful projects doing amazing things around the world to save our planet’s future." 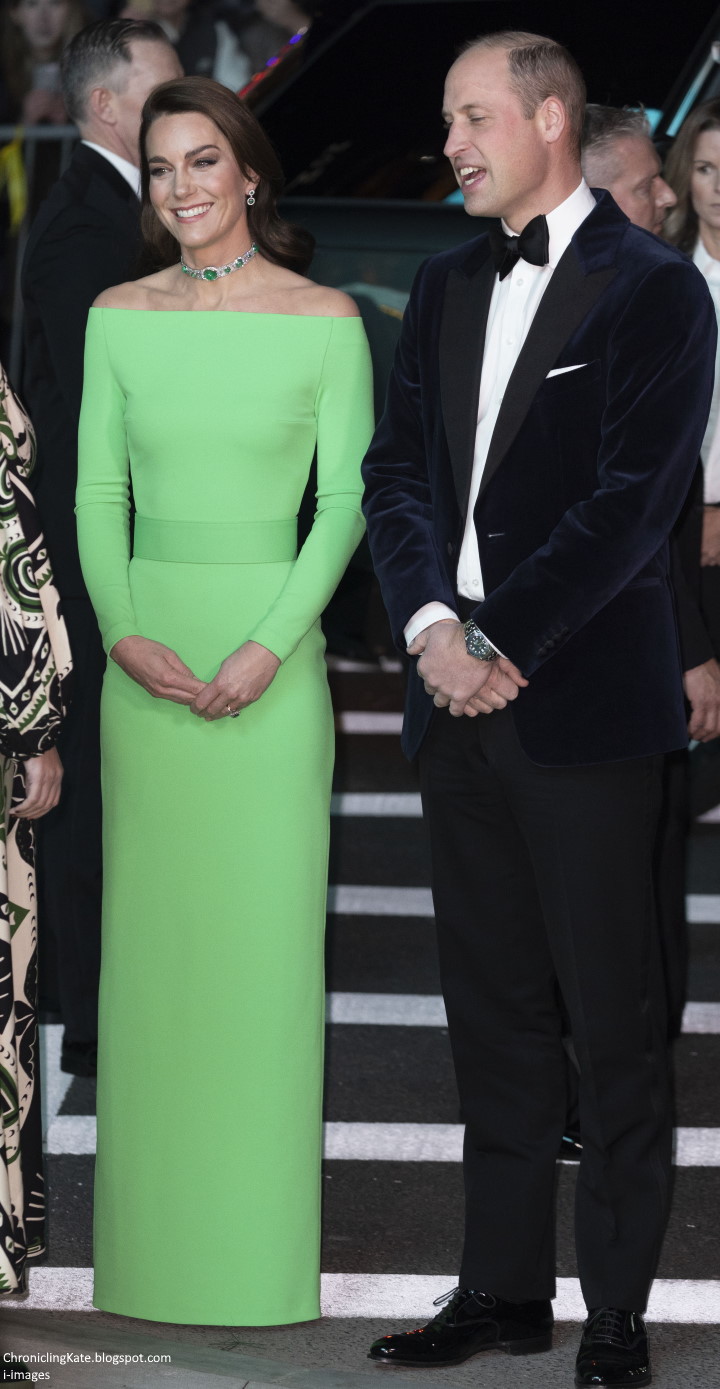 The Prince and Princess walking the Green Carpet -- the same one used for the ceremony in London last year. As you can see, it worked perfectly with Kate's dress. 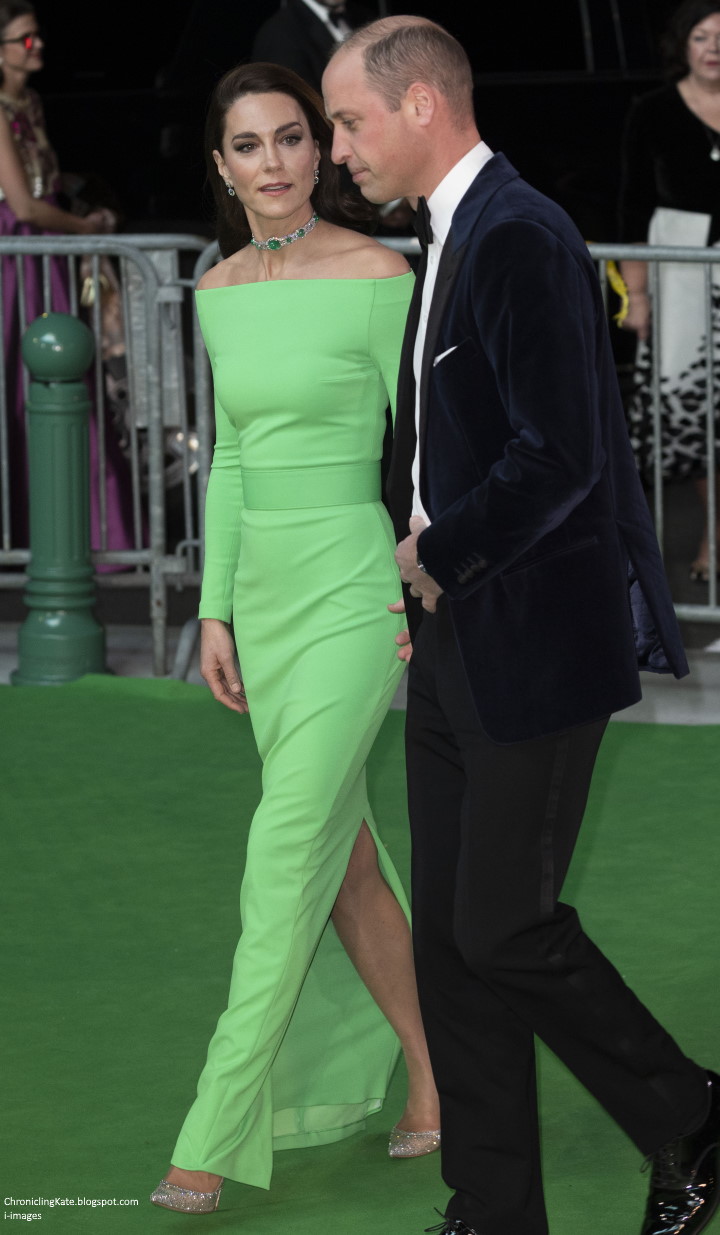 The Prince and Princess of Wales have arrived at the @EarthshotPrize Awards in Boston pic.twitter.com/sTr0MDCXcH

Another view from Simon Perry.

Earthshot has taken over Boston throughout the week. 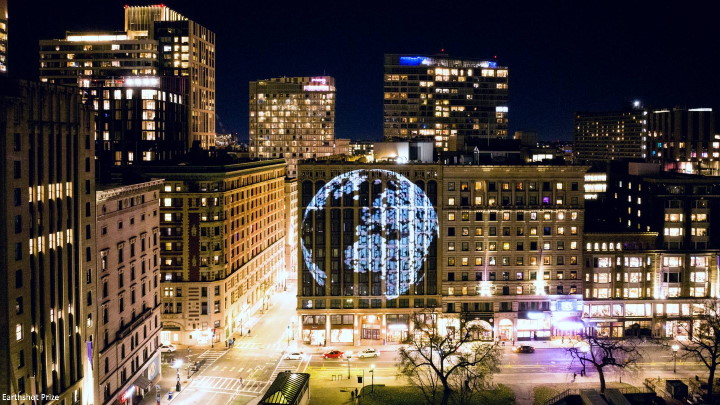 Landmarks all over the city lit up with green. 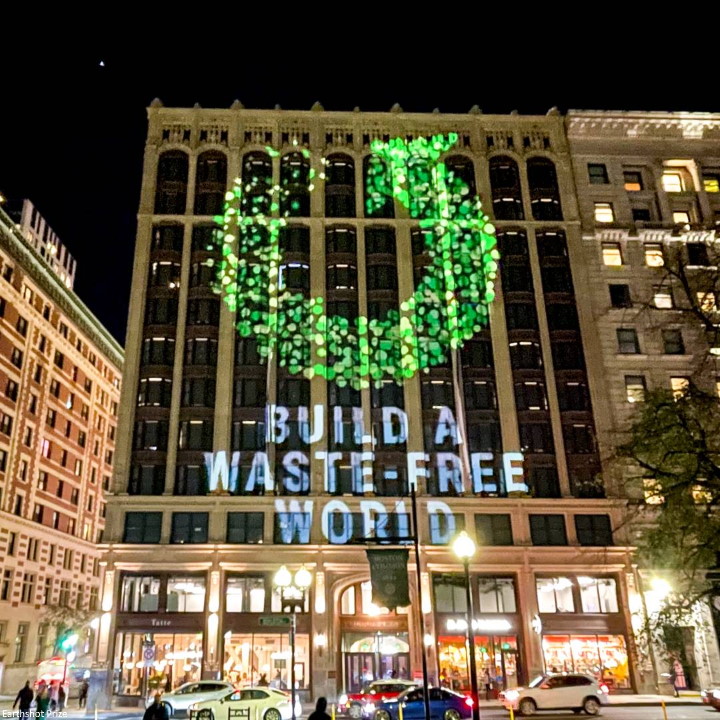 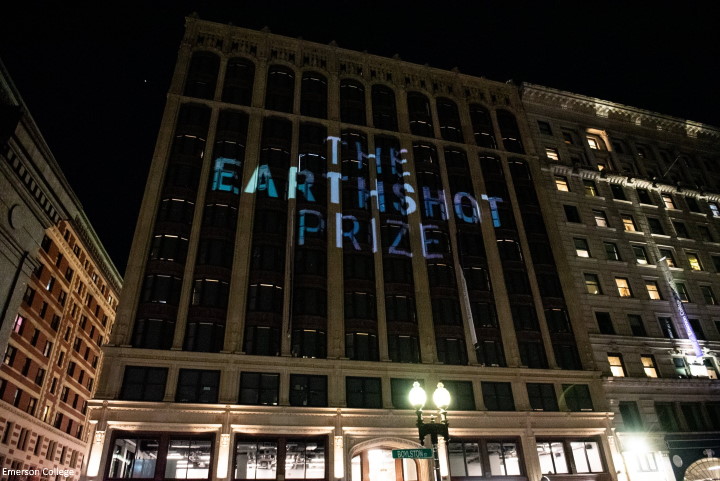 The Earthshot Prize is based on five ‘Earthshot goals': protect and restore nature; fix our climate; clean our air; revive our oceans; build a waste-free world. Five £1 million prizes will be awarded each year for a decade, providing at least 50 solutions to the world’s greatest environmental problems by 2030. The event is "a celebration of the natural world, focussed on turning the current pessimism surrounding environmental issues into optimism by celebrating the people and places driving change.

The Prince and Princess speaking with John Kerry.

Another look at the dress as the Prince and Princess meet @JohnKerry #EarthshotBoston2022 pic.twitter.com/HtIW7qric3

A sea of flashbulbs on the green carpet.

The MGM Music Hall is a major music venue with a 5,000 capacity.

William and Kate entering the venue.

To say the finalists are once again inspirational would be something of an understatement. Let's take a look at the nominees. 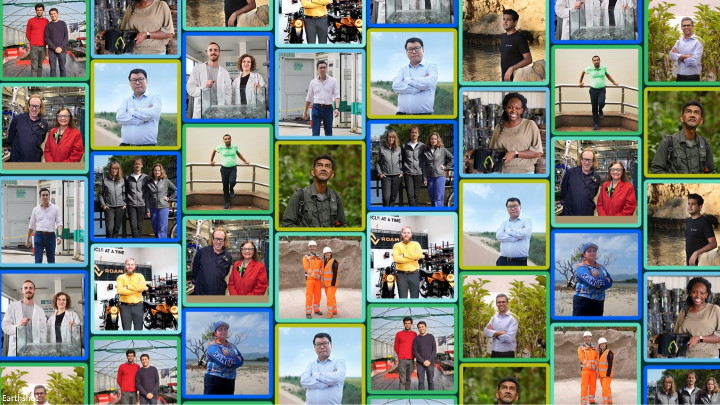 The show was hosted by award-winning presenter Clara Amfo for the second year. Clara was joined by actor, producer and director Daniel Dae Kim. 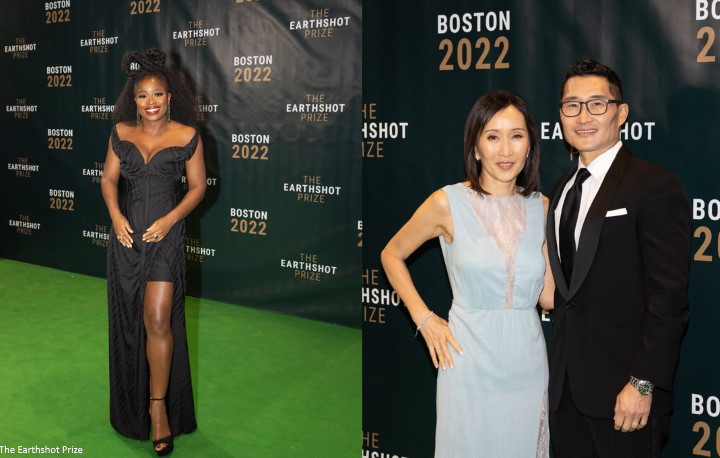 The one and only Sir David Attenborough voiced the opening of the show. He has been a passionate supporter of Earthshot since its inception and serves on its council. 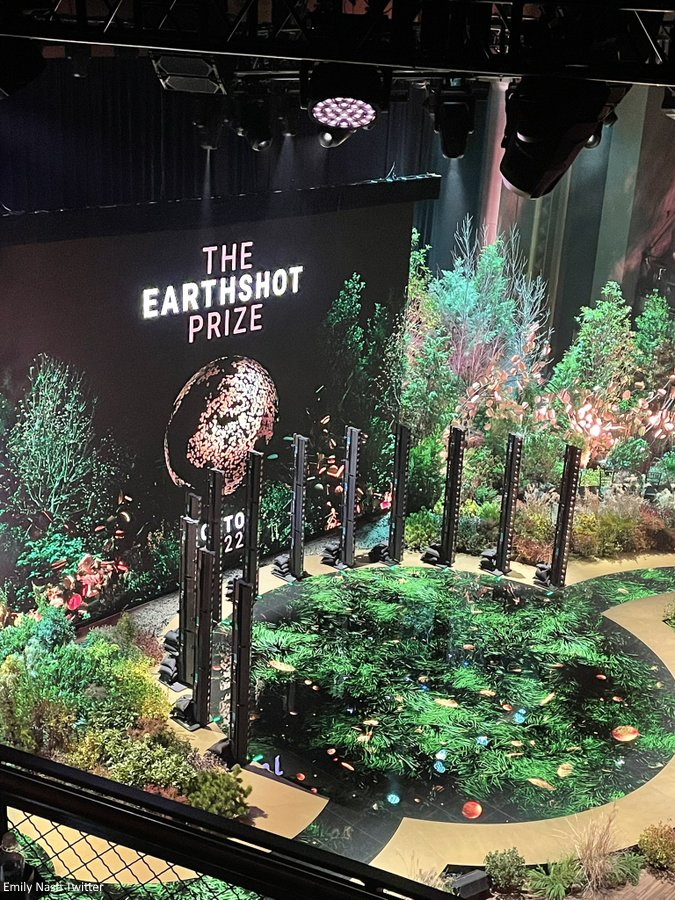 The Prince and Princess take their seats.

Mingling with guests including Mitt and Ann Romney, and Joe Kennedy and his wife.

David Beckham was announced today as a presenter. 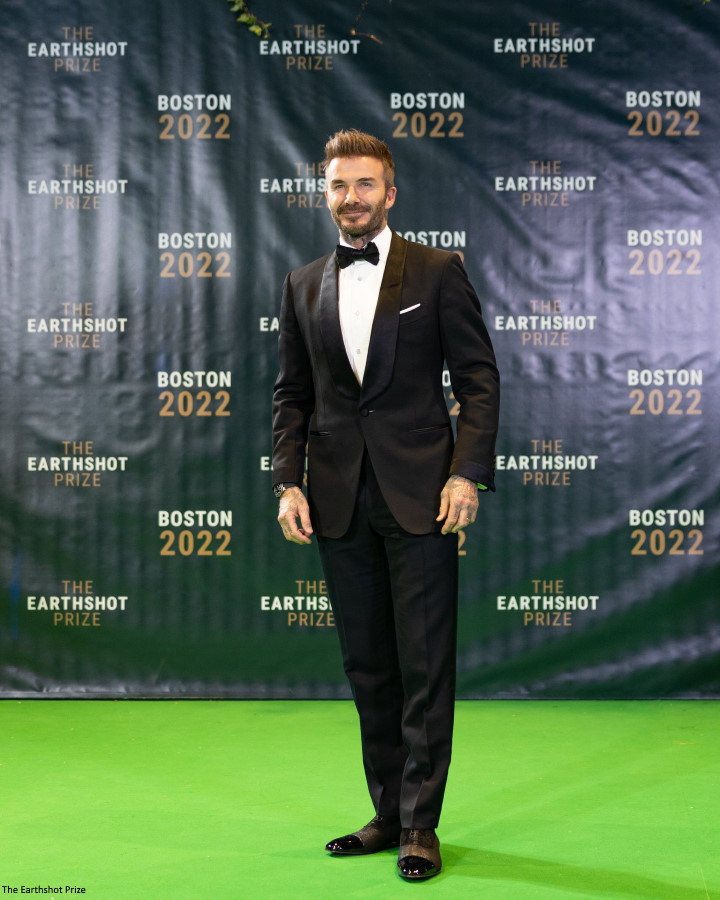 The star-studded line up of presenters also included Catherine O Hara (as it 'tis the season... I will always and ever remember Catherine for her outstanding performance in Home Alone). "Repairing our planet is one of the most important things we can do in our lifetimes. The passion and ambition of this year's Earthshot finalists is much needed in a world of such turmoil, and I am truly honoured to play a role in helping them share their work with the world," the actress and comedian said. 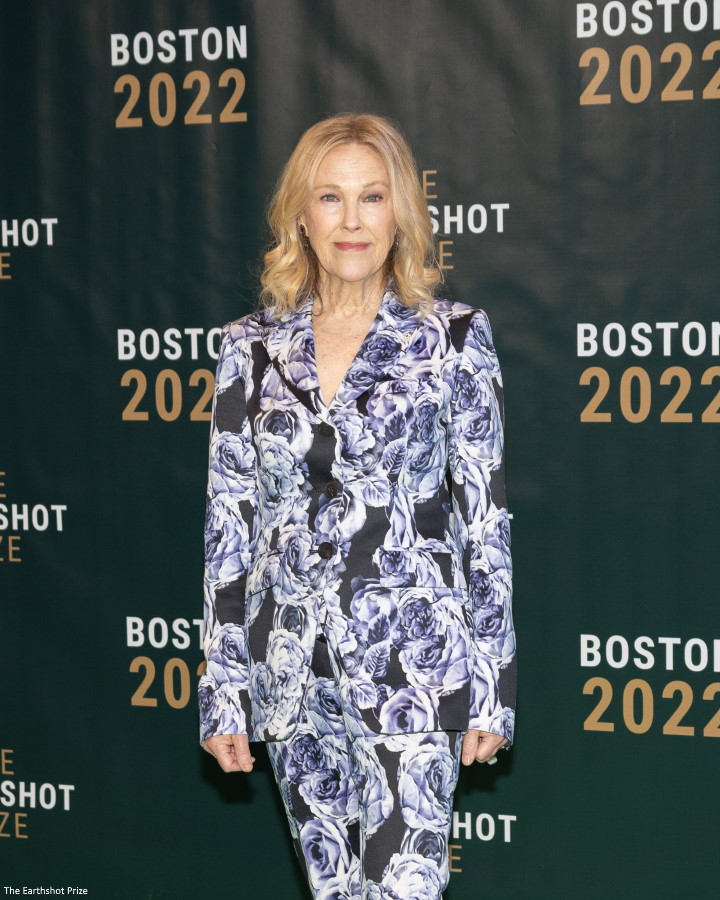 Bohemian Rhapsody and Mr. Robot star Rami Malek said: "The fifteen finalists of this year's Earthshot Prize are deeply inspiring. They are dedicating their lives to building solutions that will repair our planet, and I can't wait to present an award to one of the incredible winners for 2022." 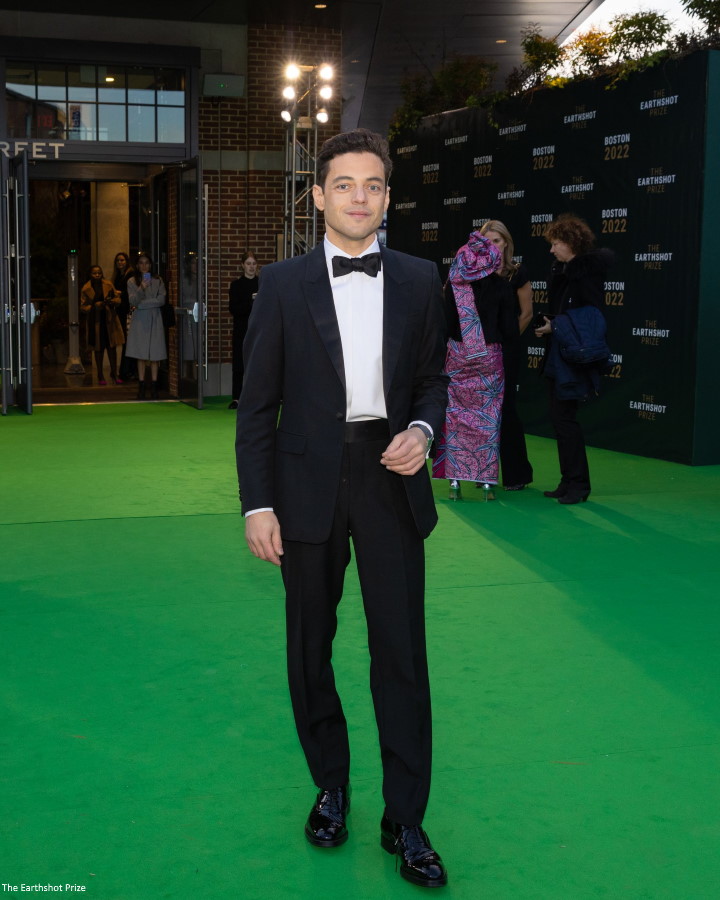 Also on presenting duty, actress and advocate Shailene Woodley: "It is an honour to be a presenter. I am thrilled to play a part in spotlighting the finalists." 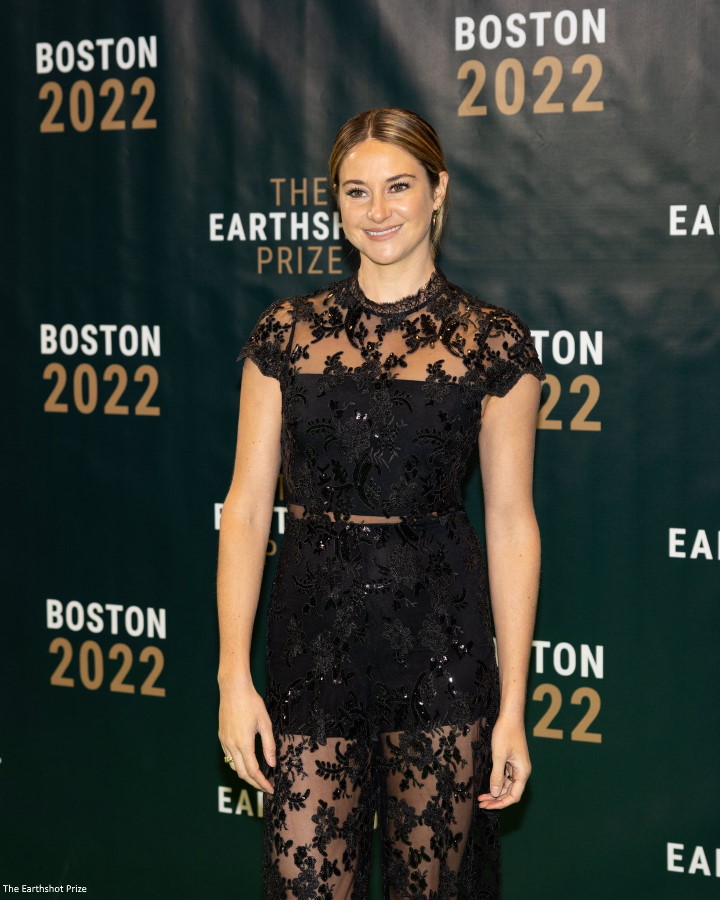 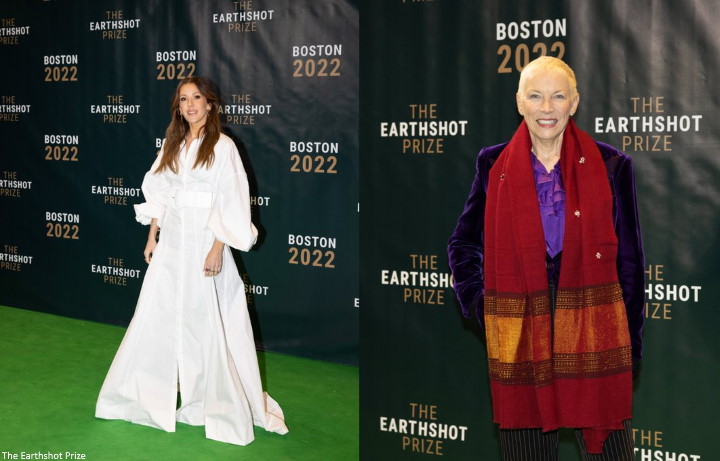 Carly Ledbetter reports Chloe's and Halle's looks were chosen to "represent the earth — the water and the greenery and the land". The Prize celebrates groundbreaking solutions to help repair our planet and tonight we have done just that.

Congratulations to all the Winners and Finalists of this year’s awards. pic.twitter.com/ZPScg3GQU4

&mdash; The Prince and Princess of Wales (@KensingtonRoyal) December 2, 2022

The Earthshot Prize Medal is inspired by the iconic 'Earthrise' photograph taken from the Moon by astronaut William Anders aboard Apollo 8 in 1968. It was selected to reflect the "beauty and fragility" of our planet. 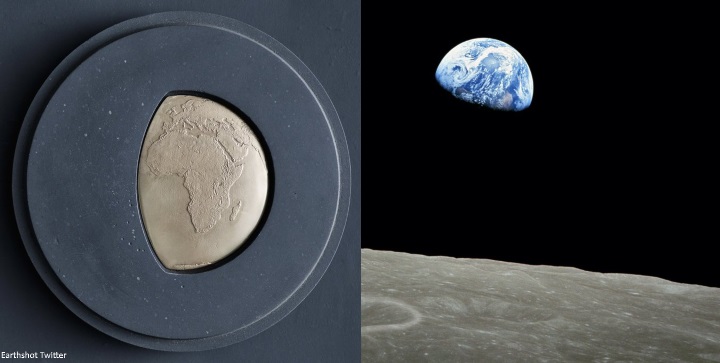 'Prince William has urged the world to "choose the path of hope, optimism, and urgency to repair our planet," after hailing the five winners of the 2022 Earthshot Prize Awards at a glittering ceremony in Boston.

He told the audience: "When I founded this Prize in 2020, it was with the ambition to harness the same spirit of ingenuity, that inspired President John F. Kennedy to challenge the American people to put a person on the moon within a decade. So, it has been an honour to share the stories of our Earthshot winners and finalists from the heart of his hometown.

"I believe that the Earthshot solutions you have seen this evening prove we can overcome our planet's greatest challenges, and by supporting and scaling them we can change our future."'

The ceremony will air around the world on BBC One in the UK, PBS in the United States and Multichoice across Africa. The show will also be available globally on 4 December on YouTube.

PBS President Paula Kerger said she is "delighted" PBS will be the US broadcast home. BBC Head of Commissioning, Jack Bootle noted: "Last year's ceremony won a BAFTA for Best Live Event: it was a festival of hope and human ingenuity. This year's will be every bit as spectacular." 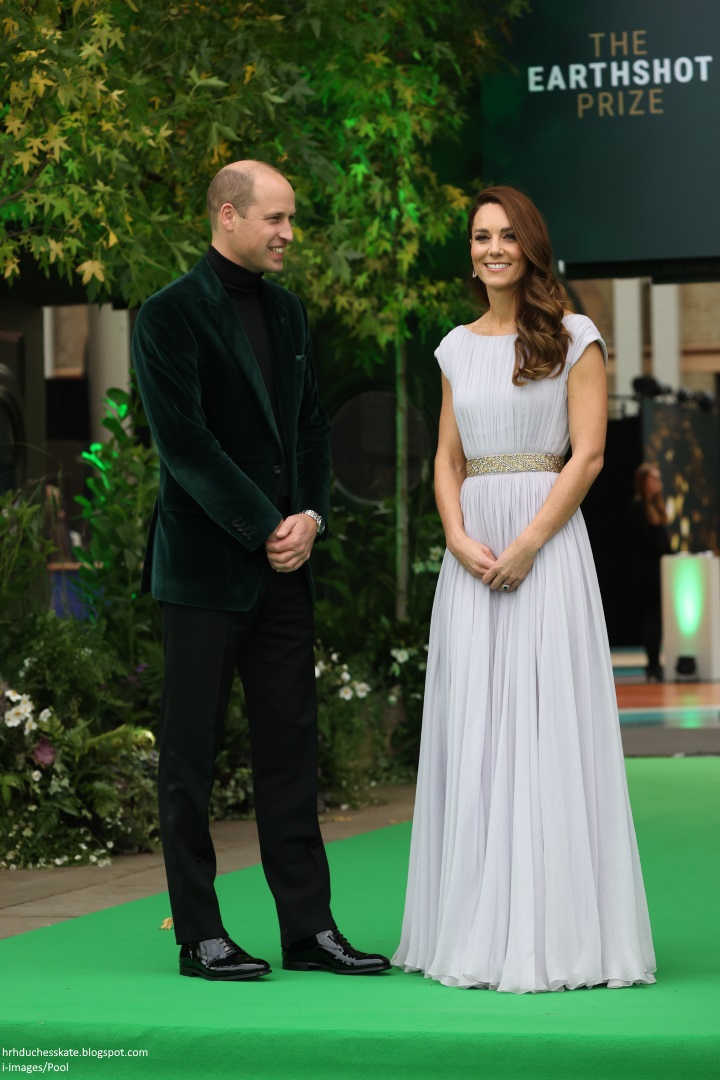 The Princess wowed in a body-skimming, sleek, bright green dress by Solace London. With the theme of sustainability in mind, Kate rented the £350 maxi dress from Hurr Collective for £74. 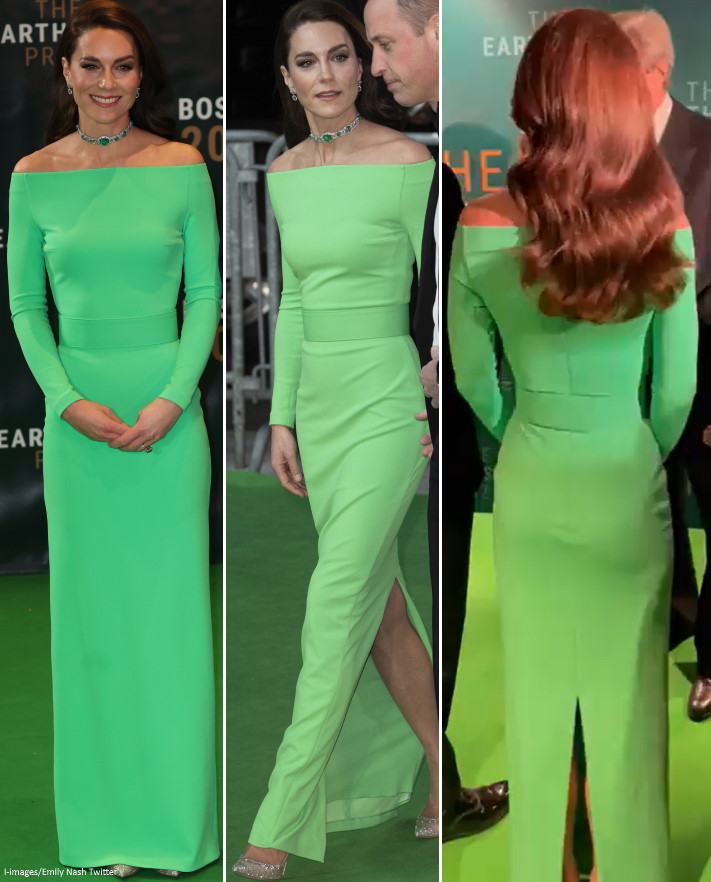 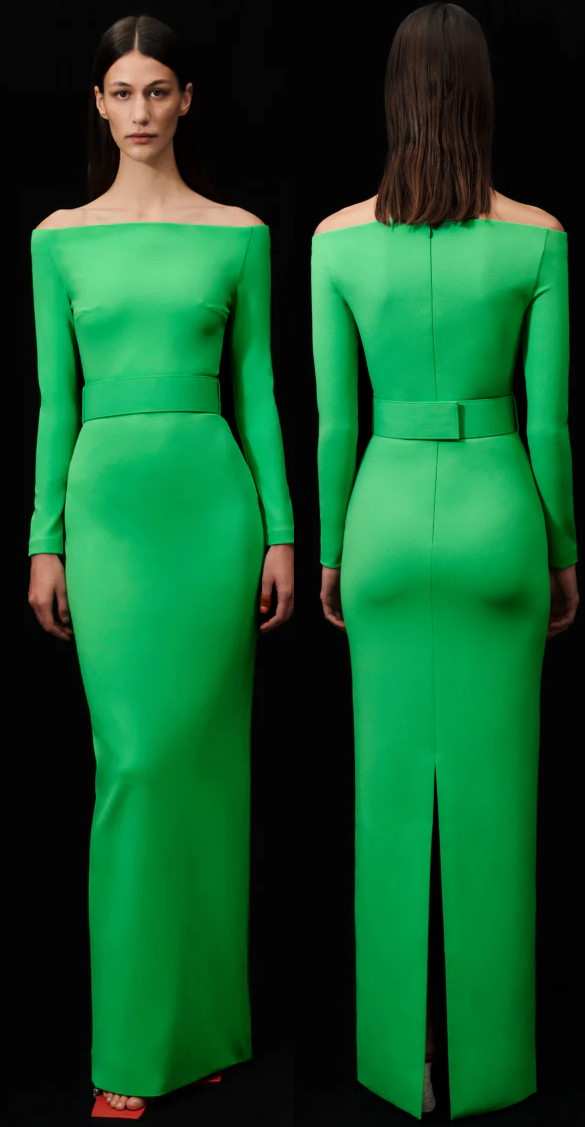 The British womenswear brand was founded in 2013 by long-time friends Laura Taylor and Ryan Holliday-Stevens, Solace London "blurs the line between statement making and wearability". 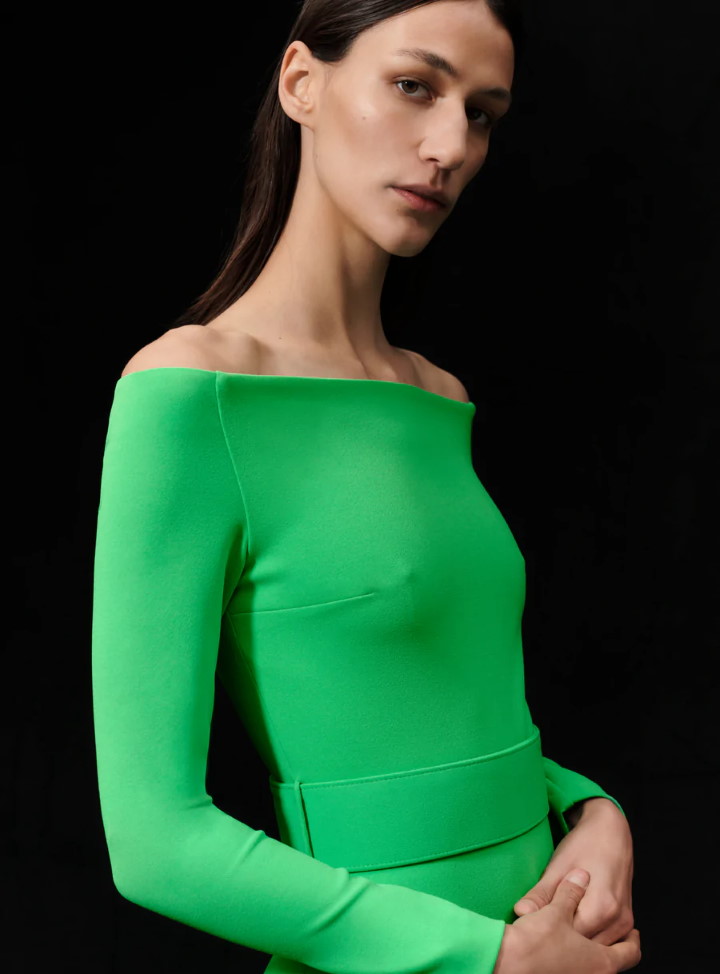 The Princess debuted a rather majestic piece of jewellery from the royal vault this evening... 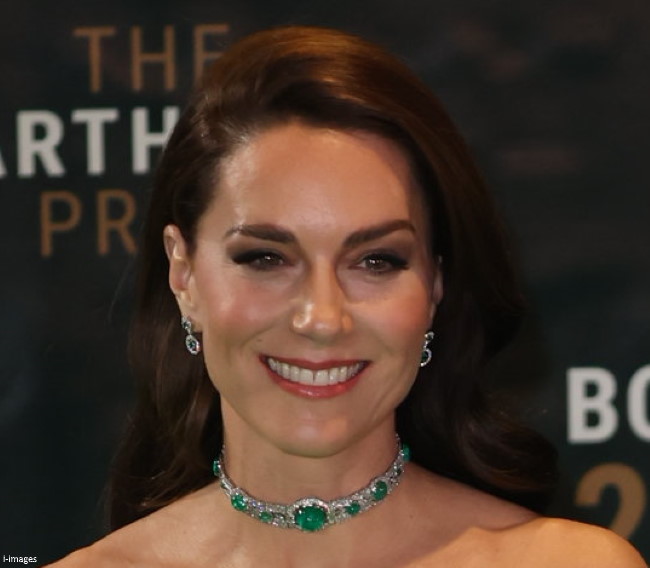 The Court Jeweller reports: "The necklace comes straight from the Buckingham Palace vaults. It’s part of the Delhi Durbar Parure, a set of jewels collected by Queen Mary at the time of the Delhi Durbar in December 1911." Below, the piece was showcase as part of a 2006 Buckingham Palace exhibition. Celebrating Elizabeth II's 80th birthday, it was the largest ever exhibition of 80 gowns and jewellery from the 1940's to the present day, worn by Her late Majesty on private and official engagements.

The piece is closely associated with the late Princess Diana who wore it on numerous occasions. Below, we see Diana wearing the piece with an elegant Jacques Azagury gown at the Tate Gallery in 1997 on her 36th birthday.

Of course, Diana memorably wore it as a headband in Melbourne in 1985.

Charles and Diana took to the dancefloor.

The UFO No More team suggest Kate's earrings are the Asprey Emerald and Diamond Halo earrings mounted in platinum. I've long thought the Princess likely received a number of impressive items of jewellery for her 40th birthday, and I do wonder if these might have been such a gift. The pair are about £9,000 and there's matching necklaces, rings and bracelets available. 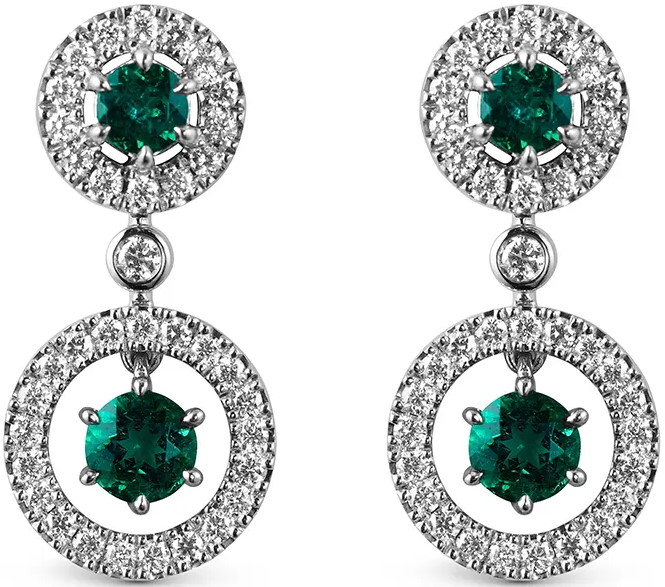 Described as: "A true Cinderella shoe, the silver-toned Rania pumps from Gianvito Rossi are lavishly embellished with clusters of Swarovski crystals. Made from mesh with suede inserts, they perch atop 105mm stiletto heels." 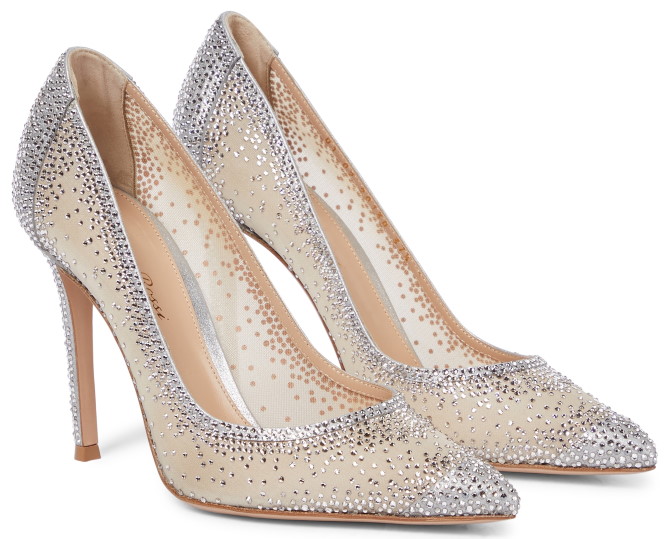 Thank you so much for following Royal Visit Boston with me on Chronicling Kate! I'm looking forward to hearing your thoughts on tonight's look :)

Comments are most welcome! Constructive discussion is always encouraged but off topic or hateful remarks will not be published.

We ask you use a name when posting (a pseudonym such as the name of a royal you like or anything you wish). If you do not wish to use the sign in options, simply select the "Name/URL" option on the drop down menu and insert your name, and if you wish the country/state you're from. You can leave the URL blank.

If there are a large number of comments, it is necessary to click the 'Load More' button at the end of the comments section to see the latest additions.

6 May - The Coronation of His Majesty The King.